We have all heard Hilary Clinton’s famous line of “It Takes a Village to Raise a Child”, suggesting that leadership and external influences can impact a child, for good or bad.  Yesterday I learned about Ben Hamilton, an 8 year old who lives in my community. I live in a lovely little Village just outside New Brunswick’s capital city of Fredericton and while this bedroom community is a safe heaven, we aren’t absent of trouble. Recently, a group vandals tagged everything from mailboxes, bleachers to even our local elementary school. They are destroying property.  They are breaking the law.  It is disheartening to say the least.  But while most of the villagers sat and hoped it wouldn’t happen again, 8 year old Ben Hamilton didn’t sit and wait.  No, Ben took action.  I think we can all learn from Ben. Maybe it doesn’t take a village to raise a child, but a child to get a community to act.   Here are 7 lessons in leadership we can all learn from an 8 year old: 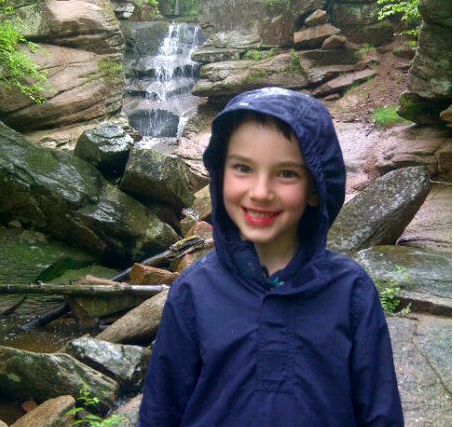 We all talk about commitment – how much we need it and why it is important, but Ben not only saw something he didn’t like, he decided to do something about it.  Originally setting out to raise $160 he and his friend have made more than four times that amount.  He could have stopped when he reached his goal, but he didn’t.  That is not only true commitment to the end goal, but it shows a level of maturity that many of us would not share.

I know my share of adults who aren’t comfortable speaking with the media, but 8 year old Ben did just fine being interviewed for radio.  In fact, he did better than just fine.  Fear does not hold him back. Sometimes as adults we don’t do something out of fear. Sometimes it is out of complacency.  Regardless of what our justification is, we don’t act. Ben reminded us that sitting and waiting doesn’t get results.

I am pretty sure that Ben hasn’t done something like this before.  After all, our sleepy little community hasn’t experienced this before and all rationale would have me believing that this is a first for Ben.  So, he didn’t have a road map to help him determine what to do, when and how.  And, as I learned from his mother, he actually did a proposal for the fundraiser and brought it to the Principal for approval.  Did I mention that Ben is just 8 years old?  That takes some natural intuition and takes me to the next characteristic of leadership – creativity.

So, how does an 8 year old raise money? An allowance? Maybe. But how about having a jersey day and a freezie day – getting them and selling them to his fellow schoolmates? Not only did he approach his problem with a creative idea, but he involved his fellow students. In other words, he has the ability to inspire, which is our next characteristic of leadership!

Setting out to raise $160 and exceeding $800 is no small feat.  While kids love freezies, being able to sell that many means that Ben is someone who truly can share a message.  He can convey what it means to respect property and to do something to fix a wrong – someone else’s wrong.

Last but not least, Ben is a communicator.  He noticed a wrong, he thought about the wrong.  He asked what he could do, found a solution and then shared that solution and vision with others.  That my friends is a true communicator.

We can learn a lot from Ben Hamilton.  I can only imagine how proud his parents, Karyn and Ryan must be.  And when asked how they were feeling: “We are immensely proud of Ben and thankful he attends such a wonderful school that took the time to listen to Ben’s idea and gave him a platform to see it through.  We are also happy that Ben has learned about community activism and, that no matter how old you are, when you are doing good things, people will be supportive and will even  join in the cause.  He now knows he can make a difference in his community- and that is a wonderful gift.”