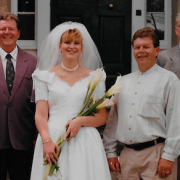 [Editor’s note: I wrote this piece just before Christmas 2017 and since this time my family lost a father, brother and uncle. Image: My Uncles and Me.]

Sears has been around for my entire life. My first experiences with Sears was a catalogue store. In my small town we didn’t have a full blown store. Of course when travelling to larger centres, it was always a treat to go into a real Sears store. And, of course when I moved to New Brunswick’s capital city, we had our own Sears store. Over the years it grew from a respectful mid-sized store to an anchor store.

About a week ago I decided to see what sales I might take advantage of. It wasn’t the first time I was in the store since the news of its demise was made official. This time however, it was different. It hit me like a ton of bricks. The store was now clearly emptying out. I didn’t really notice it in the clothing section, except for the unusual groupings, but the rest of the store was, for the lack of a better word – barren. I actually stopped dead in my tracks and looked at the store with surprise.

I watched as people moved with skill and purpose as they sought out the best deals. It really did hit me. It was like a wave washed over my entire body. I am not trying to be dramatic here, I just couldn’t help but feel very sad – profoundly sad. It wasn’t a reaction I expected for a store closing. I knew for some time that they were struggling. No, there was clearly more to this reaction than I realized.

After leaving the store, the feeling continued and I continued to ask myself, why? Why is this bothering me so much? Finally it hit me. It had nothing to do with Sears, or it’s closing. It was just the trigger. You see at the core of things I am a traditionalist. There are many things that mean the world to me – family being at the core of what matters most. And this is why memories are so important to me. I have a lifetime of great memories that have been built with both time and by mostly accident. Pleasant accidents really! Maybe I wouldn’t have had this same reaction if it weren’t Christmas time. Maybe if this were in the summer, it would have been different. However, it isn’t summer.

The loss of something can hit home really more than we think. But really, it is not about losing a store. It’s about losing tradition. This last year has had more than my share of traditions and the memories associated with those traditions challenged. I have lost people who have played a significant role in my childhood memories. First it was my Aunt Penny. We lost her in early in the year…around Easter to be exact. She played a significant and positive role when my father died some 37 years ago. I can’t forget that. Then there was my former boss and mentor. His death was a shock to me. I knew he had some health issues, but always seemed to be someone who would live well beyond others. He was kind. He was someone that firmly believed in others. He took a chance on people because he believed everyone deserved more and better. His death still rocks me.

I now shift to present day and think about Christmas traditions. I think of my uncle Patrick who hosted the most wonderful family Christmas parties. All of the family and extended family would gather at his house. My great uncles and my mother and her sister and brother, Richard (the pre-war kids) would sing war songs and Christmas classics. It was really amazing to hear them harmonizing and singing so beautifully. I will never forget that. I also can’t forget the cousins gathering in the basement and one of the uncles, I won’t say who, giving the older cousins each a bottle of beer and a sip to us younger cousins. In that house there was a lot of love, laughter, similes and hopes for the future. It was wonderful.

On top of that Christmas memory is the fact that my uncle Patrick would call each of his nieces and nephews and do the most wonderful Santa Claus. It was brilliant and wonderful all in one. And, despite my brother telling me that there was no Santa when I was just four, I still looked forward to my call each year. I still wanted to believe  and clearly my uncle wanted me to believe. Perhaps my favourite memory was the Christmas Eve he was at my house. He used my father’s office phone to call me and because of that I almost did believe that Santa was real. You see I had come to believe it was my uncle Pat who was calling. But, how could he be at my house and call…could it be…could Santa be real…? I really wanted to believe; however, I did realize later that night that we had two phone lines in the house and before caller display of course it could be done. Despite this, I never let on. I wanted to believe in Santa and I wanted Patrick to believe that I believed.

As I grew and matured, my relationship with my uncle Patrick changed and evolved. I babysat his son and my cousin Mark for years. After that I came to appreciate many of the same things that Pat appreciated: art, antiques and family pieces. Over the last few years, Pat shared with me pieces from my family’s burial ground  that he was able to save when they had to make some cost saving changes. He passed along glasses that came from my father’s side of the family that he was able to secure from a tag sale. He also passed along some precious cups and saucers from his side, my mother’s side of the family. And just this past July he passed along two wall hangings from my Great-Grandmother’s house. He made me promise that I would never paint them. It wasn’t a hard promise to make. The pieces were perfect the way they are.

So, what has this all to do with Sears Canada ceasing operations? Well, a lot. You see, it is through Sears closing that I realized why the store closing has had such an impact. It’s not about retail. It’s about tradition. It’s about family. It’s about the fact that people who have always been there…whom I could count on…who have seen me grow and change are either no longer here, or won’t be in the near future. Stores will come and go, but people matter. Family matters. I don’t want to say goodbye to these important people in my life, but unfortunately it is not my choice.

So, for those who have impacted my life in so many positive ways, I say I love you and know that your love mattered to me and to all of our family. And, I am in part who I am today because of your contribution to childhood and my adulthood.