Jimmy Kimmel did a fantastic job pranking the world.  Yes, the world.  A fake video uploaded to YouTube with a girl twerking and catching fire not only went viral with more than 9 million views on YouTube, but mainstream media went crazy over it.  So, what should this prank teach us? 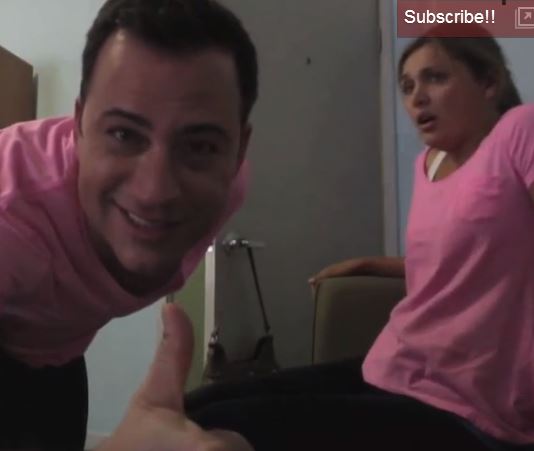 Image from the Jimmy Kimmel reveal

1. Just because it is on social doesn’t mean it is true!

What ever happened to critical reasoning?  Have we blindly become a society of people who will believe whatever we see?  Apparently so.  When did social become the one source of truth.  Why didn’t mainstream media investigate? Why did they care?  I hope that this is not indication of what is to come.  We need the media.  We need them to be able to investigate and tell the truth.  After all, media remain one of the few trusted sources of information based on the latest Edelman Trust Barometer.

As a whole we want to believe ridiculous things happen and kind of enjoy watching people make fools of themselves. (Although I must confess that I did not watch the video until I saw the Jimmy Kimmel unveiling of the prank)

3.  We have Lost Perspective

When did twerking, regardless of who is doing it, become our fascination?  More people have paid attention to this original prank than some much more important and relevant issues. Case in point:  a news story in my city has unveiled some serious criticisms of our local hospital.  While in said hospital yesterday I overheard two health-care workers  talking in an elevator.  The Miley Cyrus twerking story came up and both knew about that.  The story, which directly impacts them about their hospital, was only known by one of the two workers.  This story has been all over the media for days. I can’t imagine that it is not being spoken of a lot in the hospital.  How sad that someone would know about twerking versus something that they are a part of.

What are your thoughts on this prank and people not valuing the important issues that can directly impact them?  Have we become too fickle and lost perspective?

How to Spot a Bad Social Media Practitioner

Social Media Expert? I think Not!